Video Streaming Website Hulu has been once again in the breaking news, because they have now been considering its option after a potential buyer approached it along with an unsolicited offer. In this regard a report has been published in both The Wall Street Journal and Bloomberg by stating the same thing that many multi national companies like Google, Microsoft and Yahoo have already quoted their offers for buying it and eventually with the sequence to the fact Apple is now in the same ship. Actually this Cupertino based company is now considering for making a bid to their own website in order to bolster its video offerings.

As NPD group stated “In the overall video streaming market the current holding of apple is near about 4%, with the comparison of Netflix’s, which is holding 61%.” In this matter Hulu reportedly asking apple for a sum of $2 billion, though I am thinking that, this will not left any effect in the cash position of Apple. Additionally it can be fit easily with Apple’s Apple TV Streaming Box. Here another rumor are already starting to begin, within which various analysts are starting to say that perhaps in future Apple is going to introduce a new TV set by holding the hand with it. 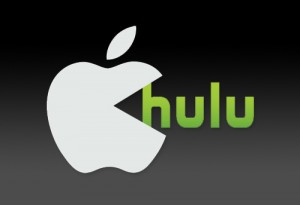 By keeping link with that fact, the combined owners of Hulu like Comcast Corp, Walt Disney Co, Providence Equity Partners, NBC Universal and News Corp are repeatedly offering any of the potential buyers a five year extension of the program rights with two years of exclusive access.

So, if Apple till yet have not made up its mind for a subscription based video service than their, this move of buying Hulu may somehow go a long way towards securing their infrastructure. But as a business point of view it will go against its traditionally closed eco-system strategy.  Though, now this company Apple is offering its users purchase or rental TV shows and movies through its iTune store on Windows. Mac and OS X, but it has not yet been cleared either will Hulu accept Apple’s this offer or not?