Toronto – Here’s an instance of two competitors sharing the same space. The California based tech giant Apple Inc. has opened shop in Blackberry maker research in Motion’s own backyard in Toronto. The iPhone and iPad have long been the cause of grief for RIM and with the intention of Apple to make this new store the local hub of iPhone and iPad devices, the turf war has taken a new turn. The new Apple store is just 10 minute drive away from the RIM office front steps in Waterloo, Ontario. The two giants have been sweating it out in the minds of smart phone users for quite some time now, but RIM business seems to have hit rough waters with many of its customers migrating to Apple products.

The overall market share of RIM has eroded considerably as other manufacturers have started to shell out smart phone which are heavy on features and low on prices. 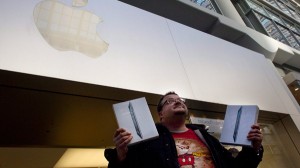 To add to the grief of RIM, the launch of the Playbook – closest competitor to the iPad was not received well by critics and had a lackluster launch earlier this year. The Apple store in waterloo had to come up today or tomorrow, but some feel that the timing was more of a strategic move, rather than mere coincidence. Waterloo is considered the tech capital of the country and Apple’s decision to open store in Waterloo when business for RIM is going low couldn’t be badged as coincidence. This is the 20th store of apple in Canada.

Last month RIM has announced that it wants to stay competitive by cutting corners and it plans to do so by slashing 20000 jobs in Canada, which is 11% of the total workforce. The company has also decided to bring out hotter and better models of Blackberry and also provide an upgrade for existing models. Inspite of RIM’s plans to rev up business, its share prices still remain to sit low at $21.4 and some analysts feel that this undervalues the company and provides an opportunity for investors to invest in. On the other hand Apple is planning to bring out newer products early September this year and the list might contain the iPhone 5, speculate analysts. They might even come up with an upgrade from the iPad also. The company has also found a way to woo in RIM employees by offering them discounted rates on apple products through a web site.