Has one heard the phrase “Sky is the limit”?  This fits the director, who leads a team of students to invent software that could run UAV on smartphone.

Director of MIT’s Humans and Automation Lab, Missy Cummings joke that she told teachers to assigned more projects on her students so that she will not get spied by her students.

Before becoming a director, Cummings works as a Navy fighter pilot for 10 years.  At present, she manages a team of students that produced software that could fly the unmanned aerial vehicles (UAV) on easy to use controllers.

Flying UAV is not as easy as flying a helicopter from those video games.  One would need to be a skilled pilot just like Cummings.

US are using the UAV to do jobs that are hard to reach or dangerous for most humans.  In cases like the recent Japan disaster, people will not need to go the actual site to get photos.  All they need is to fly a UAV and capture some decent pictures from above.  It reduces the risk of getting infected.

It could also be used to track wildlife, scan skies for rising tornadoes, patrolling the border, and getting video footage after or during disasters.

Since the idea, behind the vehicle is get angle of places that would be hard for people to do.  If one have their own UAV, surveying the world gets easier.

Another point why US use them is that this vehicle never suffers from fatigue.

To develop their software, Cummings and her team uses a quadcopter, mini helicopter with four rotors.  It mimics the flight of a hummingbird.  Has the capability to fly 30 miles per hour. 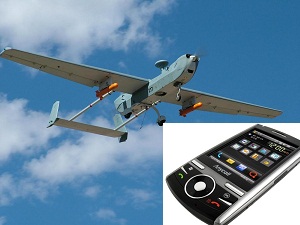 The team bought the helicopter in the Internet and equipped it with mini cameras for spying.

Cummings claims that controlling the vehicle gets easier.  An Iphone user’s needs to point the helicopter to where the user wants it to go.

Developing the application would take out the hard part of flying the vehicle.

With the app being develop, all the pilot needs is a 3 minute instruction and the smartphone.

Test the app, they ask several people from the streets to test flight the UAV by using the smartphone.  People did not encounter any problem while flying the UAV on their smarphone.

At the last part of the interview, Cummings said that in these times.  People who dreams of flying can now do what they want.  Average people could easily fly one of those UAV anytime with the use of the app.